I pray to Allaah that the year 2013 brings you all the divine gifts of happiness, great health, prosperity and success.

With all my loving best wishes and blessings,
Imrat Khan
Posted by Belinda at 10:19 PM


I am gravely saddened to hear the news of Pandit Ravi Shankar-Ji's passing away.  Oh, what a great genius with such wonderful imaginations and musical ideas and artistry of sitar.   He created different nuances in orchestral music, film music and coordinated himself with great maestros like Menuhin and many other internationally famous musicians.  He created a very charming style of sitar playing of his own and popularized sitar all over the world.

From the early 50s I heard several performances of Pandit Ravi Shankar-Ji playing with the great Ustad Ali Akbar Khansahab when their unique sitar and sarod performances were coming into the limelight.  These memorable performances were the most popular items all over India in all the major music festivals, conferences and music circles of those days.  I also had the opportunity of being at one of the most memorable events of a trio performance with their great master Ustad Allauddin Khan.  Accompanying them on tabla were two of the greatest maestros of tabla nawaz Ustad Ahmedjan Thirakwa Khansahab and Pandit Kanthe Maharaj (the doyen of Banares gharana) at the venue of Eros Cinema Theatre in Mumbai.  My early exposure of these great masters along with my Ustad and brother Vilayat Khansahab I will always treasure these memories in my heart as long I live.

I always respected Ravi Shankar-Ji and had great admiration for him throughout my life and in return I always received great affection from him for me and all my sons.  Once he also attended a debut performance of my sons at Queen Elizabeth Hall and blessed Nishat and Irshad in 1977.  Whenever he saw me sitting in the audience and listening to his beautiful performances he always acknowledged me with his charming smile.

My deepest respect and compliments to Ravi Shankar-Ji whose name and fame became international as one of the most celebrated musicians of India while also side-by-side giving recognition to his master Ustad Allauddin Khan.

Now the passing away of Pandit Ravi Shankar-Ji is very sad news not only for me but for the entire nation of India and all those countries where he touched their hearts with his performances.  All his name and fame was very deserving because of his great artistry and his contribution to Indian music.  Although he lived a very blessed age of 92 years he never stopped giving his performances.  Now his name and fame will live for centuries through his recordings and contributions and the love of his followers.

May Allaah send him to a heavenly abode and I have all my sympathies and blessings to his wife Sukanya who is very fortunate to have shared her life with him and his daughter Anoushka who is a very talented and promising musician.   I send my love and blessings to the entire family.

PS.  Actually I have an entire book of memories for this great master since I have had the opportunity of seeing fantastic dancing performances of him dancing with his brother Pandit Uday Shankar-Ji in Calcutta at my early childhood.  Then listening to the great performances of Ustad Allaudin Khan and his duet performances with Ustad Ali Akbar Khansahab and his solo performances in almost every corner of the world.  This was an unforgettable musical period which came to an end from his passing away.  The memories of his contributions and his beautiful music will always live.

Here I pay homage to one of the greatest personalities in the musical world in a few words. From an illustrious Indian musical dynasty, the Legendary Sitar Maestro Imrat Khan will perform a unique trio of Sitar, Sarod, and Tabla with his sons Wajahat Khan and Shafaat Khan.

The unique and meditative sounds of India will resonate together at Sheldon Hall in St. Louis Friday October 26, 2012 at 8:00pm.

For more information and tickets please see:  www.artandsoulcafe.us  or www.metrotix.com
Posted by Belinda at 10:52 PM

Ustad Imrat Khansahab will be gracing the stage with his Sitar performance at Kamani Auditorium October 2nd, 2012.  Tabla accompaniment by Rashid Mustafa Thirakwa.
Posted by Belinda at 8:50 AM

Imrat Khansahab wishes all a Happy Eid!  He sends his blessings and best wishes to his friends, students and admirers for 2012.
Posted by Belinda at 3:36 PM 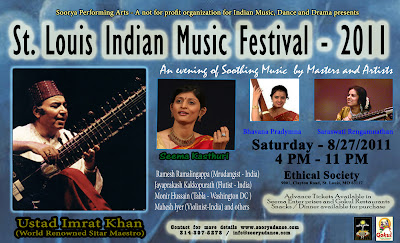 St. Louis Indian Music Festival will be held at the Ethical Society in St. Louis Missouri August 27th, 2011.
For more information please see at:  www.sooryadance.com
Posted by Belinda at 10:23 AM

Essence of his Teachings

Poet of Sitar and Surbahar 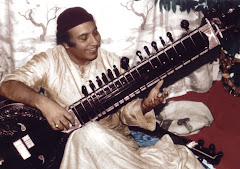